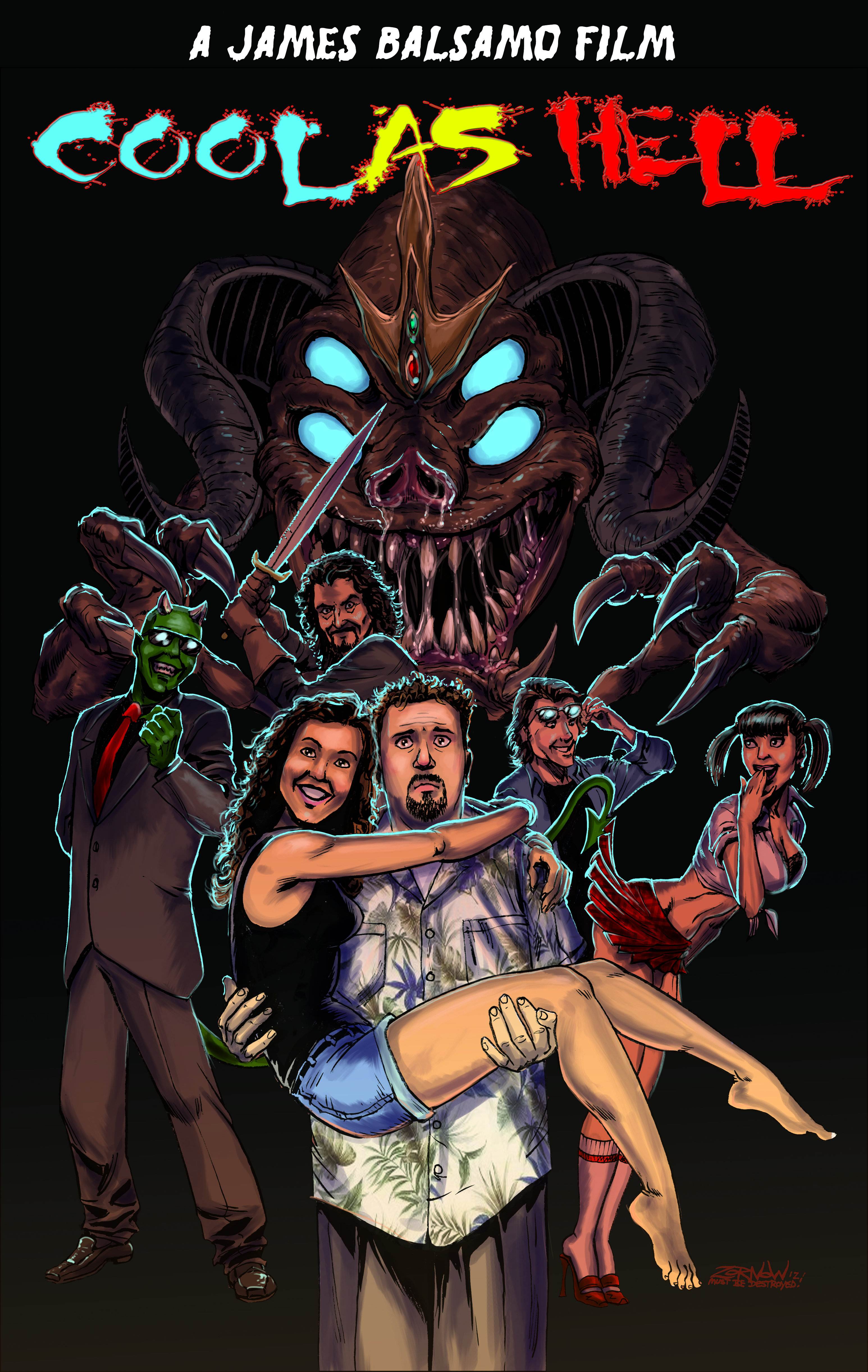 When a friendly demon helps two guys to meet girls, the portal to hell also lets in a more evil creature that starts terrorizing the town.
Rich and Benny are having trouble with the ladies, until they befriend a demon named Az. It's a non-stop party until a soul hungry beast leaps through an open portal from the underworld and starts terrorizing the town. It's up to Az and the boys to send the creature back to the depths where it came from, and look good, while doing it in "Cool As Hell".
Lovable loser comic book store employee Rich (amiable James Balsamo, who also wrote and directed) isn't having any luck with the ladies until he befriends smooth demon Az (an excellent and engaging performance by Billy Walsh). However, Rich must also do battle with a soul hungry beast and a horde of zombies after an open portal to hell enables said beast to enter our world. Balsamo relates the entertaining story at a zippy pace, offers an amusing sense of inspired crude humor (the talking booger in particular is simply sidesplitting), and delivers both oodles of graphic over-the-top gore and a handy helping of tasty distaff nudity. Frank Mullen has a ball as belligerent jerk Sal while Dan E. Danger contributes a funny turn as Rich's hilariously foul-mouthed smartaleck buddy Benny. Moreover, this movie further benefits from cool guest appearances by such familiar folks as Tom Savini, David Naughton, Tim Ritter, Donald Farmer, and Andrew W.K. Granted, this film is pretty dumb and made in a rough manner, but that's exactly what gives this flick its distinctly goofball charm. Galvanized by a roaring hard rock soundtrack and a winningly breezy attitude, this honey overall rates as a complete loopy hoot.
I first learned of this movie when I attended Crypticon KC 2013, where the director/writer/star James Balsamo was a featured guest(?!). When I passed his table, he asked if I'd heard of the film, and then told me it featured Andrew WK, Tom Savini, David Naughton, and several other personalities, and he described the movie as "Bill & Ted meets Beetlejuice." After having seen the movie, I'd describe it as more like Jay & Silent Bob meets Weird Science, only without any trademark clever Smith dialogue, and if Kelly LeBrock was a bald green demon... And as for "featuring" the above mentioned celebrities... Their appearance in this movie is shorter than the time it takes to read this sentence. In most cases, the gag is that Balsamo's character bumps (literally) into one of them on the street, gets yelled at, then walks away... Savini actually gets to play a "Demon Slayer" for about a minute and a half in a sort of flashback...

Balsamo does voice-over OVER the action he's describing, lingers FOREVER on flashbacks of his character's sexual failures and various other GRATUITOUS nudity, and generally makes the film look like a junior high film project shot by a bunch of stoners, not a legitimate indie with a budget of $60K. I'm willing to overlook some technical weakness in an indie if the story or SOMETHING is engaging, but, this film is essentially weak fantasy for losers. In this piece they,through Balsamo, get to save the world, get the girl, hack zombies with a katana, ensure all the villains get their just deserts, all while getting high on pot from a super bong granted by a piece of talking snot... Yes, I really just wrote that... It sounds like it should be a blast to watch, sober, drunk, or high, and it was probably a lot of fun to make. But, it was not remotely enjoyable to watch...

The biggest touch of creativity is the Acid Bath prod. co. animated logo. And, on a final note... If my movie is called, "Cool As Hell," and one of the main characters is "Az the demon," I'd have called it, "Cool Az Hell."